Southern Spain, A Place I Once Called Home

I lived in Rota for 3 years and just loved it.

Flamenco, ferias, bullfights, jerez sherry, olives, beautiful beaches, castles, Seville orange trees, siestas and paella. Paella and jamon…I cannot say enough about these two delicious foods. I fell in love with jamon and paella. I would eat it slices of jamon alone, as an appetizer, in a sandwich and with or without a glass of Spanish wine.  I ate so much paella that I learned that there is no such thing as too much paella!

So many things come to mind when I think of southern Spain but mostly, it’s beauty. I fell in love with Its people, it’s culture, it’s food, it’s language, it’s drink…with Spain.
Andalucia offers a special charm and magical presence that envelops you and nestles close in her beautiful arms. From its beautiful landscapes to its lovely people to the best cafe’ con leche in the world. 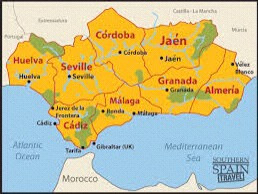 These are some of my favorite cities in southern Spain. 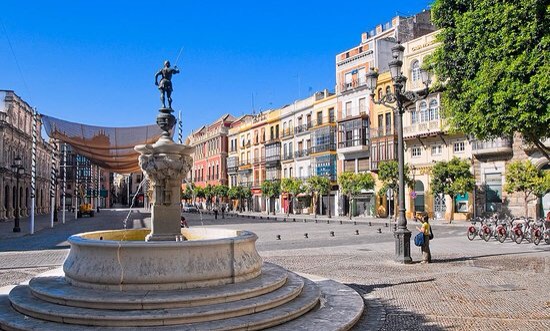 Cordoba – Located on the Guadalquivar river this must see town boasts roman history, moorish sytle patios and a magnificant mosque, the Mezquita. 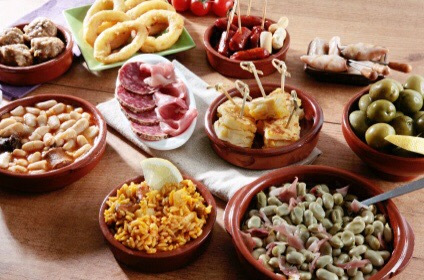 I could go on and on about the food in southern Spain….absolutely amazing! The best small dishes you could ever want as well as the best large family style dinner in the south–south of Spain, that is. My favorite tapas are grilled queso, clams in garlic and tomatoes,tortilla de patatas and gazpacho, Jamon Serrano and chorizo with anything with a nice cold glass of sangria. I gained so much weight while in Spain.

Ensaladilla: potato salad with mayonnaise and either tuna or prawns

Salmorejo: a thicker version of gazpacho, often used as a sauce

Arroz del Día: rice of the day, with meat and/or seafood, served at lunchtime

Albóndigas: meatballs – most often pork, but also of beef or seafood.
The fresh seafood…I ate it everyday. Grilled tuna steaks, salmon, lobster, clams, mussels and shrimp, oh my!!! I shopped at the open markets where you could purchase fresh everything– vegetables, meats, olives. Southern Spain, a foodie’s dream.

If you visit, visit while there’s a feria. Ferias in Spain are just fabulous!!! Food, fun and flamenco for the entire family.  A feria is an annual local festival in Spain and southern France, characterized by bullfights, bull running in the streets, bodegas (outdoor bars or cellars with festive music) and bandas.

I would advise anyone to visit Spain before they leave this beautiful, beautiful earth and make certain you visit the Andalusia area. It is one of the most beautiful places that God created. The areas offers so much in culture, food, scenery, architecture and the people are so very interesting.

Spain, on Europe’s Iberian Peninsula, is really 17 autonomous regions, each with its own geography and culture. The capital, Madrid, is home to the Royal Palace and singular Prado museum, housing works by European masters, and Segovia to the north has a fairy-tale medieval castle and Roman aqueduct. Catalonia’s capital, Barcelona, is defined by Antoni Gaudí’s quirky modernist architecture, including the Sagrada Família basilica.

This site uses Akismet to reduce spam. Learn how your comment data is processed.

Contrenia L. Fluker 📲
Hello March! I know you are going to be GOOD TO ME!
Average Caribbean temperatures for most destinations range from the low 80s Fahrenheit in the winter to the high 80s in the summer. ☀️ 🏖 🌴 👙
We lift Texas up in prayer. ❤️
We are Travel Safety Certified!